Born May 7th1937 in Weston, West Virginia you lived the transitions from black and white to color television and polaroid to Kodak to digital photography. You purchased one of the first microwave ovens that came on the market as well as one of the first dishwashers and smoke detectors for your first home in Philo, Ohio.  You gave me my first Commodore 64 computer, Sony Walkman, and you purchased me a video camera to help record memories after the birth of your first granddaughter in 2000. You also got mom a whole lot of kitchen gadgets that I'm pretty sure she still doesn't know what to do with.  On the plus side at least you only had to eat fish sticks the first year of your marriage.

It is interesting the misconceptions that people have of only children; they often think that we grow up leading lonely lives. They would be wrong. When I wanted to learn to run track, you took me out behind the barns and taught me to run.  You took me to the lake to learn to swim.  Dang, life’s rough when your dad was a former frogmen/navy seal.  I decided to try out for basketball; you played basketball throughout your entire highschool career so you taught me to play. Sorry I didn’t make the team; I hope you weren’t too disappointed. I had more fun playing with you anyways. Oh yea, and we had that cool rope swing that you got the great idea to have swing over the huge embankment.  That was a lot of fun; the whole two swings we got in until mom caught us, and made you take the swing down.  I’m not entirely sure, but I think you got one of those talks that usually made you roll your eyes and grin at me.

I’ll never forget the night you came home from work and told me that we were moving to Snortin’ Ridge.  I didn’t want to move; I had a best friend and a cool bedroom and a teacher that I really liked (even if she was the reason I was and am a vegetarian).  I also had a playhouse and cool neighbors.  You asked me to come over to sit on your lap.  I could never stay mad at you when I was sitting on your lap.  I always felt so safe and snuggly in your arms.  But you promised me a horse; my very own horse if I was okay with moving.  Okay?  Hand over the boxes, let’s go.  Best yet, a couple of months after we moved and were settled in, Gypsy came home and was the best horse ever.  A year or so later, Moochie came home and was the best pony ever.   I sure wish I would have realized to appreciate them more.  I’d give anything to have a horse and that time with you back. 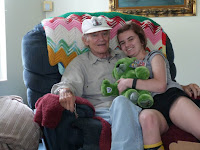 I guess what I didn’t realize until now is that I was as much a daddy’s girl as Ry was a grandpa’s girl.  I followed you around as much as she did and reaped the benefits and rewards as much as she.  Of course, she like me also experienced the Butler "sense of humor."  We have pictorial evidence of the infamous lemonade tree that you convinced her was the source of her beloved drink but she should count herself lucky at least she didn’t go to high school and ask her science teacher about milking a pigeon like a certain unlucky daughter did.  She also didn’t come home from a date and have the porch light automatically turn on to find a scarecrow body swinging from the porch ceiling—I’m still convinced I got my first scare wrinkle that night. Then again at 16 she is convinced we have to leave Wisconsin and head back to Ohio to find really good cheese.  And in elementary school she was convinced she needed a plan just in case a band of wild high schoolers broke into our house—according to you and her, she was going to hide in the bear cave with her shot gun and some cheese until it was safe to come out.  Of course she would be wearing her boots just like grandpa—I think you got her her first pair well before she could walk but I think I also had my first pair before I could walk from your dad. Then again my dates were treated to being met at the door by Bandit, the rescued racoon, and having to feed her chicken, oreo cookies, and marshmellows if they wanted to get back into their cars. I suppose that that time Dan and I convinced Ryley we were going to leave her with the Medicine Man for a few months was kinda almost similar in an apple truly doesn’t fall far kinda way.

Everyone knows the love story between you and your girls, but what I don’t think most people realize is the connections you had with your boys.  You and Caden had a rocky start.  Caden didn’t respond to the usual Jerry Butler tactics—Caden marches to a different beat---we call that drum beat autism now but we didn’t know that at the time.  For the longest time he was terrified of the back of your head if you had a hat on and the front of your head  without a hat.  But he could tolerate and even enjoy your company if you wore a newspaper, so that’s what you did and in time you two worked out a pretty darn good relationship that didn’t even include newspapers.  He loved the stories about the weasels and eventually was even able to play along in the stories although he never quite knew if the weasel was real or not and honestly he didn’t want to know truth. The magic of the stories was in the not knowing.  His Butler skill is the ability to tell the same knock knock joke over and over a million times and ironically the millionth time he still finds it funny.  He is usually the only one, sound familiar? 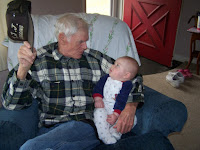 He also got your heart dad.  Elf, his service dog, is your Tandy/Waggles/Squeaker/Teddy and every other dog you have ever loved.  He is fiercely loyal to his dogs and his cats.  He reminds me of the winter you were coming home from Western Freight and you heard the faint meowing.  You searched and searched in the bitter cold before finding a tiny kitten stuck in a phone booth.  You knew he wouldn’t last long so you kicked in the frozen door and brought Henry home.  Caden is destined to rescue the Henries of the world; I know you will be proud of him.

Butlers and Animals: Might be another one of those family traditions

He told me that he isn’t sad that you are gone because he knows you are really happy where you are cause you can breathe better but he sure wishes you had email.  I agree with the sentiment but I’m much more selfish and miss you like crazy. Email would be nice though.

Then there’s Sayre.  Sayre has your independence and although he’s only 4 he is going to be like you in that he’s going to be able to fix anything or at least tear apart anything that he decides to.  He also shares your love of anything with wheels.  I think if he was allowed he’d have a motorcycle but kinda like mom wouldn’t let you have another motorcycle after your really really really bad accident, I’m trying to prevent his dad from even letting him have a three wheeled scooter but......

He has no fear just like you. Sayre talks about grandpa’s house and his tractors all the time.  You’ll always be his John Deere Green grandpa and I’m pretty sure that’s not a bad thing.  I'm also pretty sure he'll never read directions nor think he needs to and I'll withhold judgement on that one because just like you, he'll never listen anyway.

I wish you could have met Emeri, but I promise she will know you dad.  I’m going to make books for the kids and pillows out of your flannel shirts for them.  Please don’t roll your eyes at me like that—I’m going to use my sewing maching so you and grandma Butler should be pretty happy at the moment, assuming I don’t sew myself into the shirts or anything ridiculous like that.  Just promise me that you’ll visit us dad and maybe help us in China because I’m nervous.  Emeri has had a really hard life and you were always so great with kids; we could really use your loving touch to make her feel safe.

As for mom, she misses you a lot but she's strong like you and she's going to be okay.  You two had a pretty amazing marriage.  You set the bar kinda high; I hope Dan and I are making a family that you are proud of.  I wish I would have known to appreciate and cherish time together sooner dad.  I wish I would have spent less time as a kid and young adult being selfish.  I wish my kids would have known to listen more.  But as I read at grandpa’s funeral, that’s the way of life, isn’t it.  And I know we had a good one.  I would do anything to be selfish and ask for just a little bit more time together but as you would say we get what we get and now it is time to just keep on truckin’ so I’m going to try dad.  I’m going to try to be the person that you would want me to be as a parent, as a wife, and as a daughter.  I’m going to try to take care of everyone dad.  I know I’ll make mistakes, because I’m just not as strong as you but I promise I’ll keep on truckin’.  Over and out rubber duckie.